January 4, 2019 by Ruth Schmidt, The Conversation 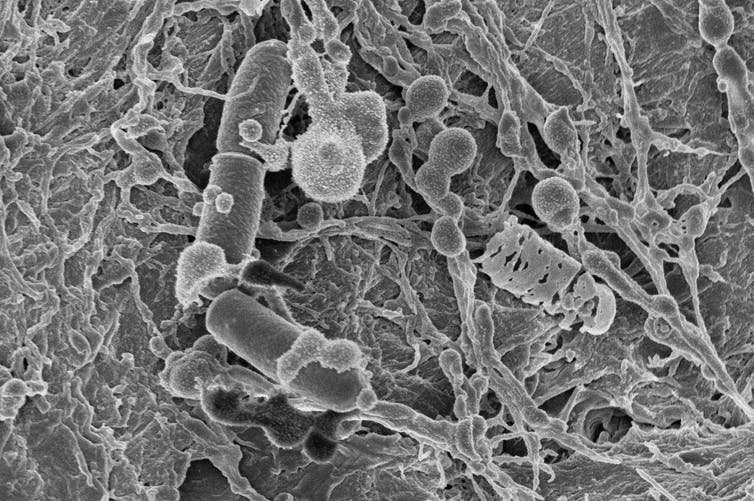 In her book Silent Spring, Rachel Carson writes: “The sense of smell, almost more than any other, has the power to recall memories….”

You might wonder how this relates to microorganisms. In fact, they produce most of the odours that we perceive.

If you’ve ever walked in a forest following the first rainfall after a dry spell, you would recall a sweet, fresh and powerfully evocative smell. This earthy-smelling substance is geosmin, a chemical released into the air by a soil-dwelling bacteria called actinomycetes.

You may also recall the tangy scent of the sea, evoking memories of crashing waves, sandy beaches and the cry of seagulls. This smell is thanks to dimethyl sulfide, a rather stinky sulfurous compound produced by bloom-forming algae.

But microbial scents can also protect plants. Agricultural crops can wither and die under drought conditions. Microbes —thanks to the scents they release —can help plants better tolerate these stressful conditions, an important service in a warming climate. As a microbial ecologist, my work focuses on understanding how microbes and plants work together, and which microbial scents help crops.

//A language of odours//

Odours, both good and bad, are caused by chemicals called volatile organic compounds, or volatiles. 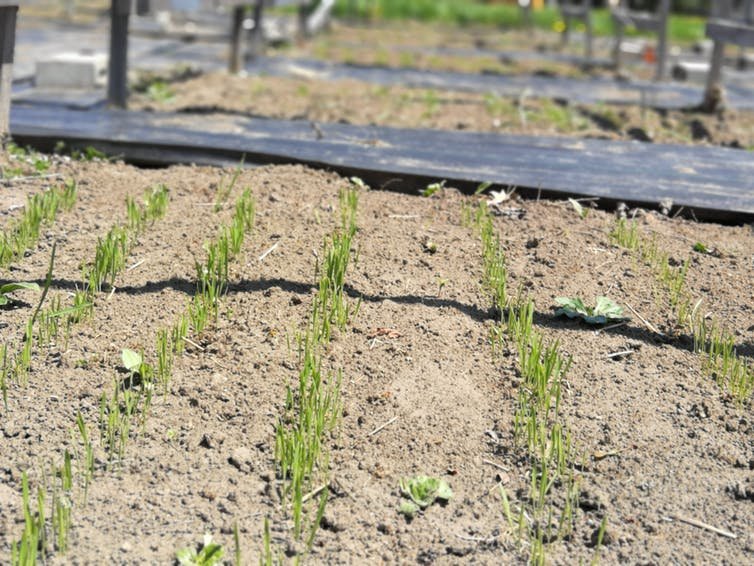 Our experimental field with wheat as a model plant to investigate the effect of drought on the plant microbiome. Credit: Ruth Schmidt

Scientists have known about this form of language since 1990. Plants use volatiles to attract pollinators, to “cry for help” when under attack by insects and to warn neighbouring plants to prepare their chemical defenses.

Yet only in the past decade have researchers realized that microbes also communicate with the help of volatiles. Some microbes use volatiles to send each other signals or coordinate their behaviour, such as their ability to move or grow.

Volatiles have low boiling points and other, unique properties that allow them to evaporate easily and travel through the air over long distances —from a microbial perspective, at least. These useful attributes help microbes communicate in soil environments.

One could think of volatiles as the “words” that build the “language” of microorganisms.

My research on microbial communication has looked at how soil microbes living near plant roots use volatiles to exchange information in the “rhizosphere,” or root space. Bacteria and fungi do in fact respond to each other with terpenes, another type of volatile.

Terpenes have already been shown to be important in plants and insects communicating with each other, but it is the first time that we have also observed terpene-based conversation between microbes.

//The scent of climate change//

Agriculture and climate change are deeply intertwined. A recent study estimates that high temperatures and drought will lead to drastic losses for all major food crops, including maize and wheat. This will have a dramatic impact on the global food supply. We are in dire need of strategies to reduce the negative effects of climate change on crops. One of such strategies stems from microbes.

Microbes live inside us and on our skin, and help keep us healthy. Like humans, plants host communities of microbes, collectively called the plant microbiome, that maintain their health, support their growth and protect them from disease by fighting off pathogens. Plants can even recruit microbes to their roots to help withstand drought.

The plant microbiome plays a large role in plant survival and vice versa —plants supply nutrients to their associated microbes that, in return, protect their host through cooperative and competitive interactions. This intimate, co-dependent relationship between the plant and its microbiome is called the holobiont.

Some even consider the collaboration a “superorganism” —an organized society that functions as a whole. The microbiome drives the evolution and adaptation of its plant host making it a resilient entity that can adapt to changing environmental conditions.

Our team investigates the various ways the plant holobiont adapts to stress, such as contamination and drought. We find ways to cultivate microbial communities with plants to boost their resilience to these stresses.

Part of our research involves finding ecologically friendly alternatives for agriculture. For example, microbial terpenes—the biggest class of volatiles produced by fungi, protists and bacteria can help plants survive in times of drought. The microbes release these volatiles to signal the plants and stimulate the plant’s defensive mechanisms.

We still don’t know how the communication occurs, or which genes and pathways are involved in the release of these volatiles, but we’re working on it. We’re tracing microbial volatiles in the plant holobiont and literally digging out the genes carrying the genetic information to produce those compounds.

We can then select the microbes that carry the genes for the smells that help plants withstand drought —and feed them to our crops like vitamins so that they can continue to provide us with food in a warmer future.

Provided by: The Conversation

This article is republished from The Conversation under a Creative Commons license.

China Released A Package Of Policies Under The “No. 1 Central Document” Of The Year, Charting The Issues Relating To Agriculture, Rural Areas And Rural People
02/25/2019
Most Recent News
Time of Press Release
Go to Top